Möbel Museum Wien has on display since February this year, until Sunday (three days from now) ‘bad things – an encyclopedia of bad taste!’ If you ever wondered who decides what is good or bad in matters of taste, you have the chance to dig into the subject at the Hofmobiliendepot in Vienna♠

The exhibition build under the influence of the publication ‘Good and bad taste in the Applied Arts’ (Guter und schlechter Geschmack im Kunstgewerbe), written by in 1912 (influenced by the times he lived in⇑) tries to apply his theories to current times, besides showing an attempt of a reconstruction of Pazaurek’s “Chamber of Horrors©” from 19Ø9.

Both ‘experiments’ are due to failure, as the reconstruction of Pazaurek’s previous exhibition leaves us (the viewers from today) with only the feeling we are seeing something old (it’s funny how time levels what could have than been inadequacies). The ‘contemporary’ part of the exhibition is also closer to ‘funny-nessϖ’ than to a serious ‘educating’ program (what these kind of initiatives wanted in the first place)♦

I’m not saying I find the bad objects good, or that I would necessarily want to wear an Obama pair of sneakers, I’m just saying it’s not good or bad if you do so either™

//Sunday there will be an auction where you can buy ‘tasteless’ objects that the visitors have brought to the museum. Don’t be shocked, it’s not about spreading the ‘bed taste’, but the money will be used for a good cause. //

Hair blow drier in the shape of a gun, Rupalley&Cie -Paris, 1890

Devotional kitsch: skeleton doll of Michael Jackson and the representation of death on the occasion of ‘Dia de los Muertos’ in Mexico

Artenschutzverbrechen: shoes made out of authentic snake and crocodile leather 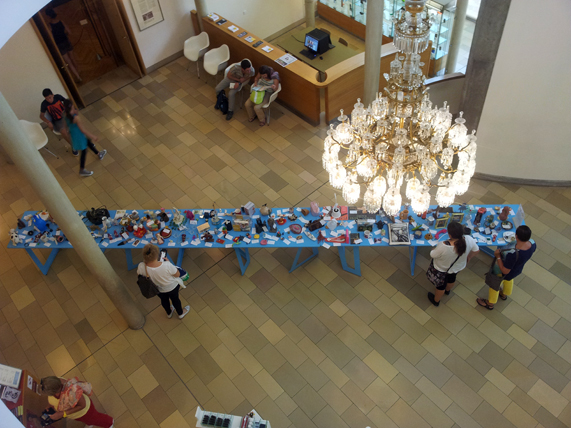